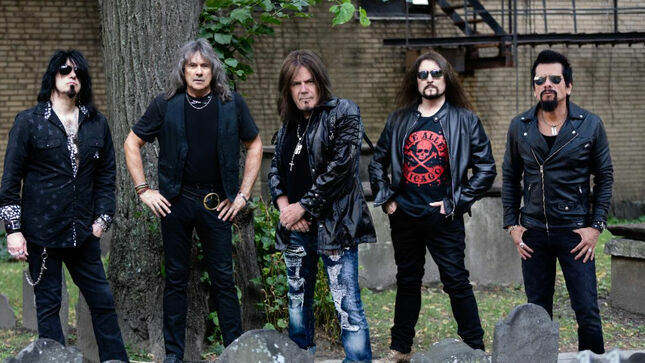 On the new album, V

Gary: “We’re really happy with the new album. We’re happy with Doogie’s vocals. Everyone worked together on the writing to make a really great record. Everyone is on the same page for the first time, thinking the same thing. We wanna rock hard and have no silliness attached to it. We are playing four songs from V when we play live.”

Gary: “Graham doesn’t like heavy metal music. He’s said it to Ritchie Blackmore, said it to Michael Schenker… he’s very difficult to work with. He just walked out of the band one day, so we called Doogie up. We didn’t lose any steam. Graham can go out and do what he wants, no hard feelings. He’s big into The Beach Boys, I am too…but I don’t want to play in a band with them. Look at the way he looks, he won’t change his thing. He’s lost in the ’60s some place.”

On Bill Aucoin and New England opening for KISS in ‘79

Gary: “Bill Aucoin was a great party animal. No one could be sad being around him. He was just a dynamo at getting things done. We are trying to get Bill in the Rock N Roll Hall Of Fame. Bill got it so we (New England) were opening for KISS on the Dynasty Tour. They were having some problems, Peter wasn’t really up to snuff. The had big problems even before that when they did the solo albums. They were having a competition on whose was the best and Ace won! Gene didn’t like that, but he was out there singing ‘When You Wish Upon A Star’. On that tour we saw the last of the original KISS. We were getting encores every night, and in Montreal we got kicked off the tour. We were getting pretty big in Canada and that night the crowd went crazy for us and we played great, too. Then after the show, they kicked us off the tour and never told us why. We took it as a backhanded compliment!”

On playing with Vinnie Vincent in Warrior

Gary: “His problem is he can’t make up his mind on things. We’d work on a song and then the next day we would have to change it all around again. Then the third day, that song would be changed again. He would drive everybody crazy, he drove the guys in KISS crazy too. He was a good guy, but he had a lot of nervous energy. He did KISS, and then when he did his own thing He tried to be Yngwie Malmsteen and that was the wrong way to go in my opinion. He’s a great guitarist, and in Warrior he was playing more melodic like Jeff Beck or Mick Jones. All the screaming guitars and high vocals on his solos albums…. I don’t think it was as good as what we were doing.”

Formed in 1983, Alcatrazz became famous for its blend of melodic and progressive rock and for introducing guitar heroes Yngwie Malmsteen and Steve Vai. Emerging in 1983 with No Parole From Rock ‘N’ Roll, which featured the hit “Island In The Sun,” the band continued building popularity in 1985 with their sophomore effort, Disturbing The Peace, which contained the hit, “God Blessed Video.” The band issued one more studio LP, 1986’s Dangerous Games, before ceasing operations the following year. The band regrouped and released highly acclaimed Born Innocent in 2020, their first studio album containing all-new material since 1986.

Both vintage and timeless, V treads the Alcatrazz textured-territories of old but with renewed vigor and verve. Whether it be the choral-echoes sitting inside the storming tempest which is “Nightwatch”, the staunch, speedy melodic metal of “Turn Of The Wheel” or the thick, bluesy chug of “House Of Lies”, there is little doubt that this Alcatrazz is going full-tilt with not one ounce of a shackle holding them back.

“The new album brings us full circle from our original roots to a modern much heavier version of all things Alcatrazz in 2021,” confirms Shea. “I feel great and I’m looking forward to the release of our new album with its heavy rocking metal sounds.”

Produced by Giles Lavery and Jimmy Waldo, and mixed by Andy Haller (Elton John, Joe Cocker, System Of A Down), V also includes guest appearances from Saxon’s Nigel Glockler (drums on “Guardian Angel” and “Blackheart”), Tank’s Cliff Evans (bass on “Grace Of God”), and Donnie Van Stavern of Riot (bass on “Guardian Angel,” “Nightwatch,” and “Target”), underscoring how perennially popular Alcatrazz’s music remains with their peers. V stands for Alcatrazz’s fifth studio album of course… but it also stands just as resolutely for Victory; the victory that sees Alcatrazz 2021 stronger than ever despite all the odds.

V is available for pre-order here.

“Turn Of The Wheel”

“Dark Day For My Soul”