Although listening while on the open road is arguably one of the best ways to experience music, a new study found that, when compared to other popular genres, music videos for rock and metal music songs are the least likely to spotlight motor vehicles.

Car insurance comparison website Compare.com took inventory of The Most Popular Cars in Music Videos, by Genre. According to their methodology, the researchers analyzed 250 popular music videos — 50 each falling under the genre categorizations of rock and metal, country, EDM, hip-hop and pop — by pulling sources from lists of top videos from publications like Ranker, Loudwire, Rolling Stone and CMT, as well as popular YouTube playlists.

Manually coding the appearances of cars, trucks and other vehicles in the clips, they noted vehicle type, make and primary colour to determine which were the most popular in each genre, as well as which genres had the biggest need for speed.

“Popular music has been synonymous with cars since the advent of motor vehicles,” the anonymously-conducted study’s introduction begins.

“Since music videos were introduced in the early 1980s, cars have been a major part of the visual aspects of promoting a song – Whitesnake’s ‘Here I Go Again’ is just one example of an ’80s classic with a memorable car scene,” they continued, ironically citing a rock video.

Perhaps counterintuitively, the results concluded that only 32 percent of rock and metal music videos brought the horsepower, while selections from hip-hop revved up to 76 percent. Naturally, country videos contained over 10 times as many pickup trucks compared to any other genre.

More stats specific to rock and metal include that Bon Jovi is obviously the most car-obsessed band in the genre, with “It’s My Life” featuring the most motors of any single video. Meanwhile, Chevy convertibles and Cadillacs proved to be the most prominent makes and models — most of which appeared in black or white. The most popular non-car vehicle? A tour bus, synonymous with the swanky (read: smelly) rockstar lifestyle.

“Karma Police” Thom Yorke might be pouty, but he knows there are probably no surprises here; although renowned poet laureate Chad Kroeger did once croon: “We all just wanna be big rockstars / And live in hilltop houses, driving 15 cars.” And we’re not mathematicians, but shouldn’t that mean a minimum of 15 cars per rock video?

Check out the full study here, and see the graphic for its rock and metal findings below. 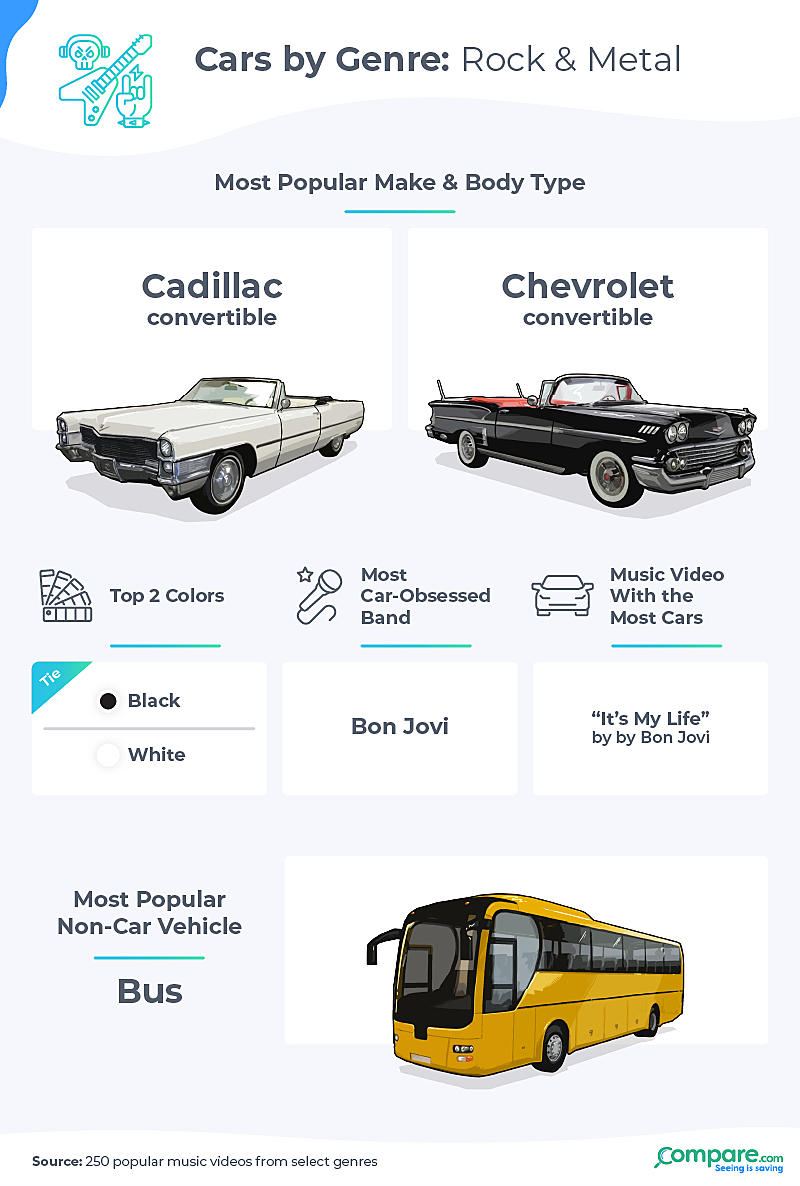 A Return to the Arts: Patrons Back for Newman Center Presents